Be Not Afraid: The Journey to a Fearless Embrace of the Holy

This year, we’ll spend the weeks of Advent exploring the theme, Be Not Afraid: The Journey Towards a Fearless Embrace of the Holy.  Over and over again in the scriptures, God speaks, either directly or through messengers.  God’s voice can be heard time and again, saying, “Fear not!”  The story that tells of Jesus’s conception and birth, as recounted across the gospels, follows in this rich tradition.

Each week in Advent, we’ll read and reflect on a portion of Jesus’s birth story, featuring a divine encounter, in which God or a messenger cries out, “Do not be afraid!”  We’ll think about how fear is present in that holy happening.  What might these encounters teach us about how our fear can become an obstacle to revelation, connection, action, or even creation? While we watch and wait for the coming of the Christ child to enter this needy and hurting world, we’ll try to loosen the hold that fear has on us so that we might warmly and deeply welcome Jesus. 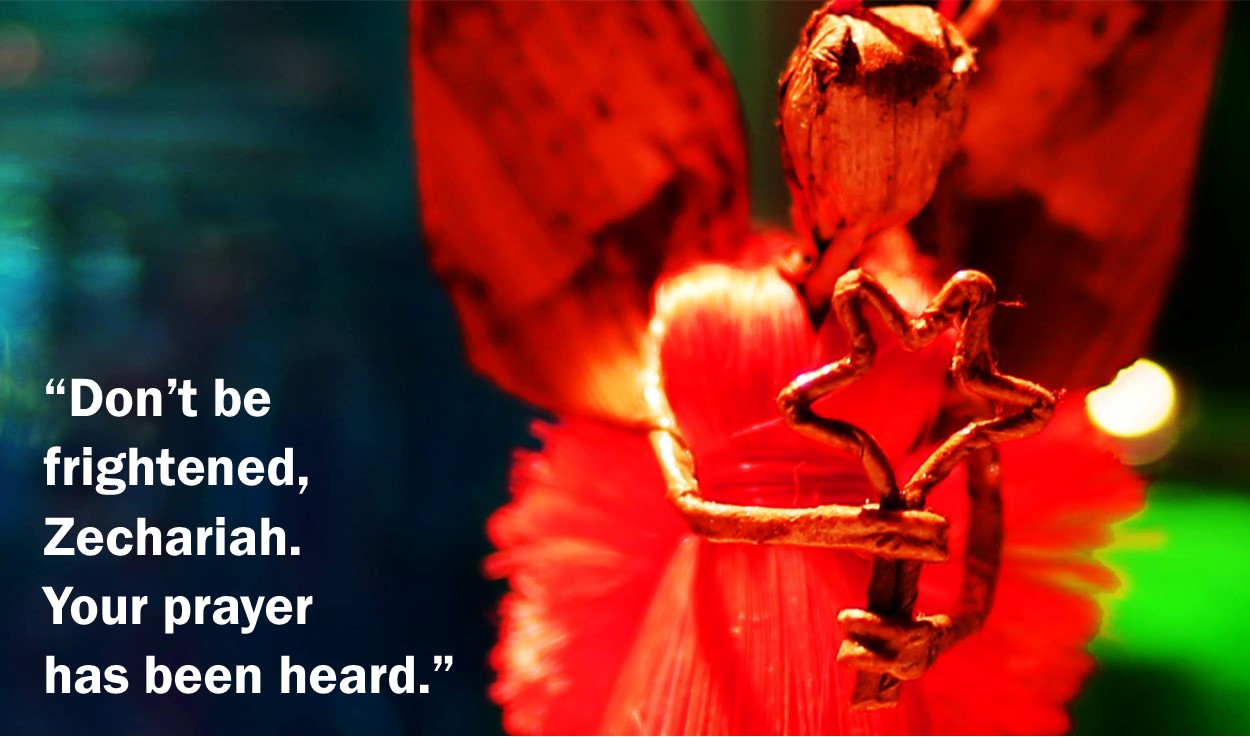 Luke 1:5-25: In the days of the ruler Herod, there was a priest named Zechariah, of the priestly class of Abijah.  His wife Elizabeth was a descendant of Aaron.  Both were worthy in the sight of God and scrupulously observed all the commandments and observances of our God.  They were childless—unable to conceive—and they were both advanced in years.

Now it was the turn of Zechariah’s priestly class to serve.  And as he was fulfilling his priestly office before God, it fell to him by lot, according to priestly usage, to enter the sanctuary of our God and offer incense.  While the full assembly of people was praying at the time of day when the incense was offered, an angel of our God appeared to him, standing to the right of the altar of incense.  Zechariah was deeply disturbed upon seeing the angel, and was overcome with fear.

The angel said to him, “Don’t be frightened, Zechariah.  Your prayer has been heard.  Your wife Elizabeth will bear a son, whom you’ll name John.  He will be your joy and delight and many will rejoice at his birth, for he will be great in the sight of our God.  He must never drink wine or liquor, and he will be filled with the Holy Spirit from his mother’s womb.  And he will bring many of the children of Israel back to their God Most High.  He will go before God as a forerunner, in the spirit and power of Elijah, to turn the hearts of parents to their children, and the rebellious to the wisdom of the just—to make ready a people prepared for our God.

Zechariah said to the angel, “How can I be sure of this? I am an old man, and my wife too is advanced in age.

The angel replied, “I am Gabriel, who stands before God.  I was sent to speak to you and bring you this good news.  But because you have not trusted my words, you’ll be mute—unable to speak—until the day these things take place.  They’ll all come true in due season.”

Meanwhile, the people were waiting for Zechariah and wondered about his delay in the sanctuary.  When he finally came out he was unable to speak to them, and they realized that he had seen a vision inside.  But he could only make signs to them and remained mute.  Then, when his time of priestly service was over, he went home.

Some time later, Elizabeth conceived.  She went into seclusion for five months, saying, “our God has done this for me.  In these days, God has shown favor to us.”

Reflection: Consider how fear can constrain us, keeping us from moving forward. 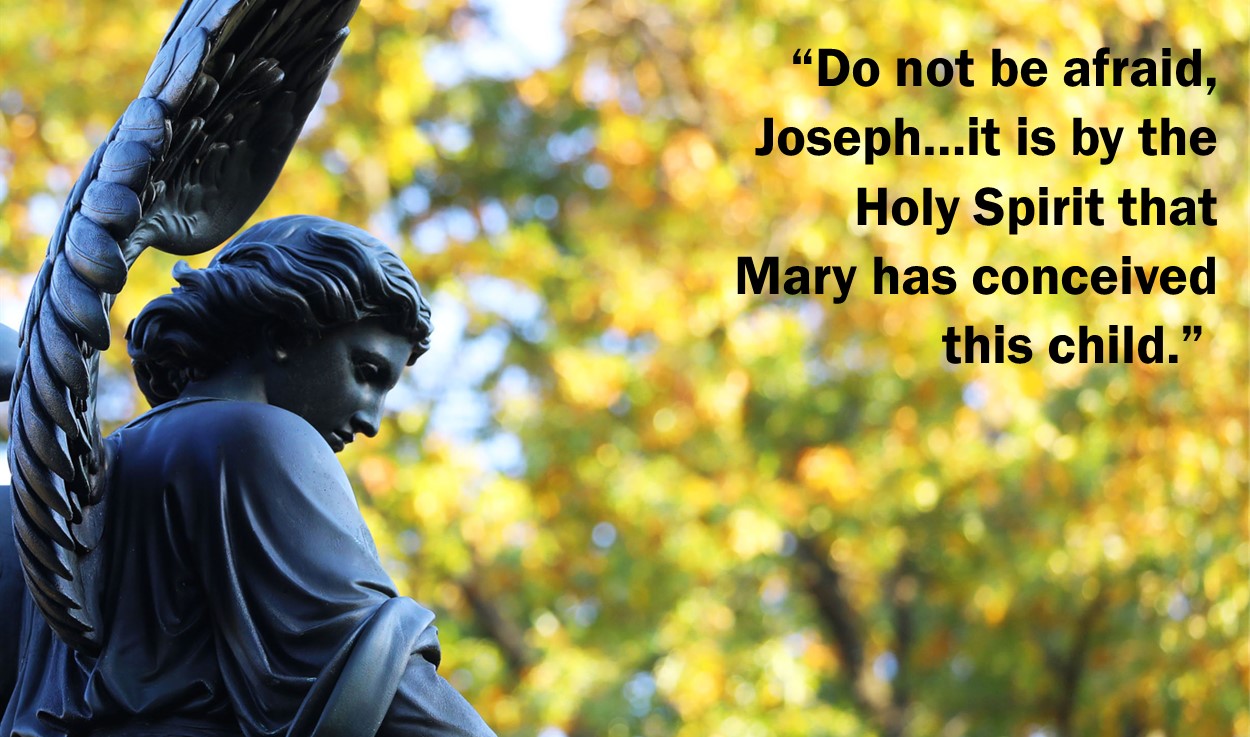 When Jesus’s mother, Mary, was engaged to Joseph, but before they lived together, she was found to be pregnant through the Holy Spirit.  Joseph, her husband, an upright person unwilling to disgrace her, decided to divorce her quietly.

This was Joseph’s intention when suddenly the angel of God appeared in a dream and said, “Joseph, heir to the House of David, don’t be afraid to wed Mary; it is by the Holy Spirit that she has conceived this child.  She is to have a son, and you are to name him Jesus—“Salvation—because he will save the people from their sins.” All this happened to fulfill what God has said through the prophet:

“The virgin will be with child
And give birth,
And the child will be named
Immanuel—A name that means “God is with us.”

When Joseph awoke, he did as the angel of God had directed, and they went ahead with the marriage…Mary had a son, and they named him Jesus.

Reflection: Consider how fear can become an obstacle to the birth of the new. 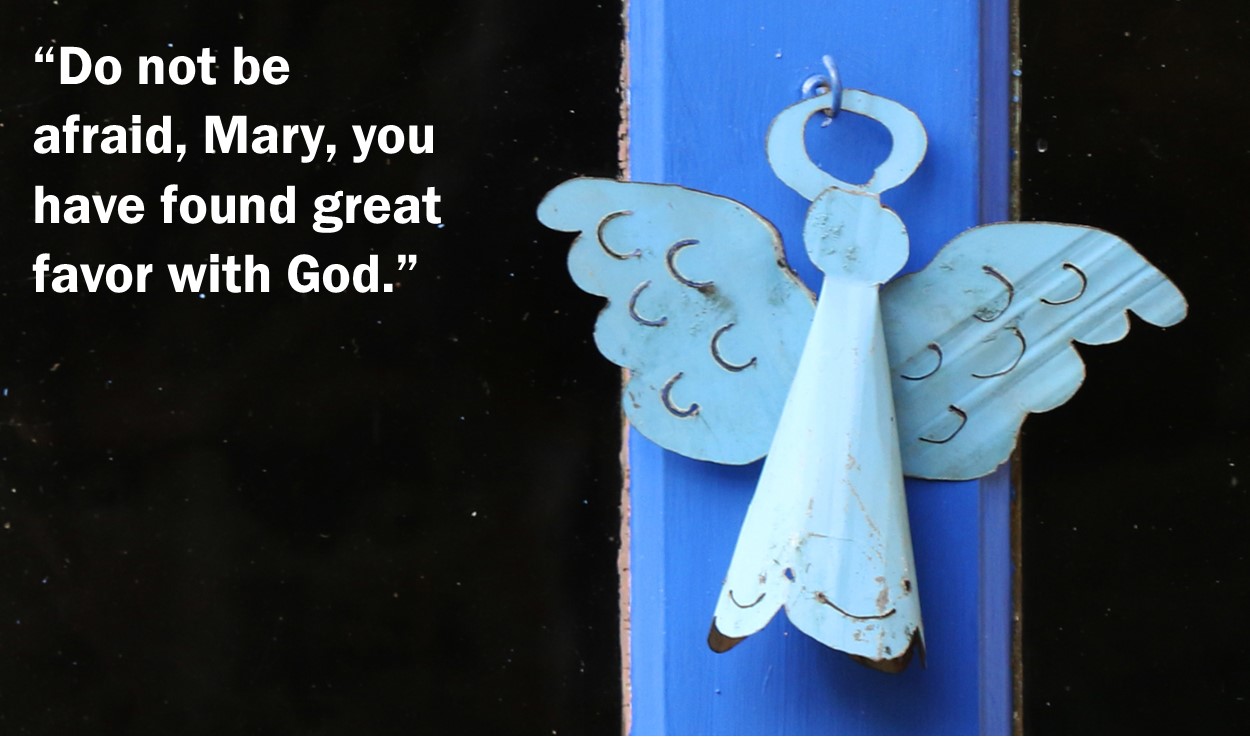 Luke 1:26-38: Six months after Elizabeth became pregnant, the angel Gabriel was sent from God to a town in Galilee called Nazareth, to a young woman named Mary; she was engaged to a man named Joseph, of the house of David.  Upon arriving, the angel said to Mary, “Rejoice, highly favored one!  God is with you! Blessed are you among women!”

Mary was deeply troubled by these words and wondered what the angel’s greeting meant.  The angel went on to say to her, “Don’t be afraid, Mary.  You have found favor with God. You’ll conceive and bear a son, and give him the name of Jesus—‘Deliverance.’  His dignity will be great, and he will be called the Only Begotten of God.  God will give Jesus the judgement seat of David, his ancestor, to rule over the house of Jacob forever, and his reign will never end.

Mary said to the angel, “How can this be, since I have never been with a man?”

The angel answered her, “The Holy Spirit will come upon you, and the power of the Most High will overshadow you—hence the offspring to be born will be called the Holy One of God.  Know too that Elizabeth, your kinswoman, has conceived a child in her old age; she who was thought to be infertile is now in her sixth month.  Nothing is impossible with God.

Reflection: Consider how fear can become an obstacle to the birth of the new. 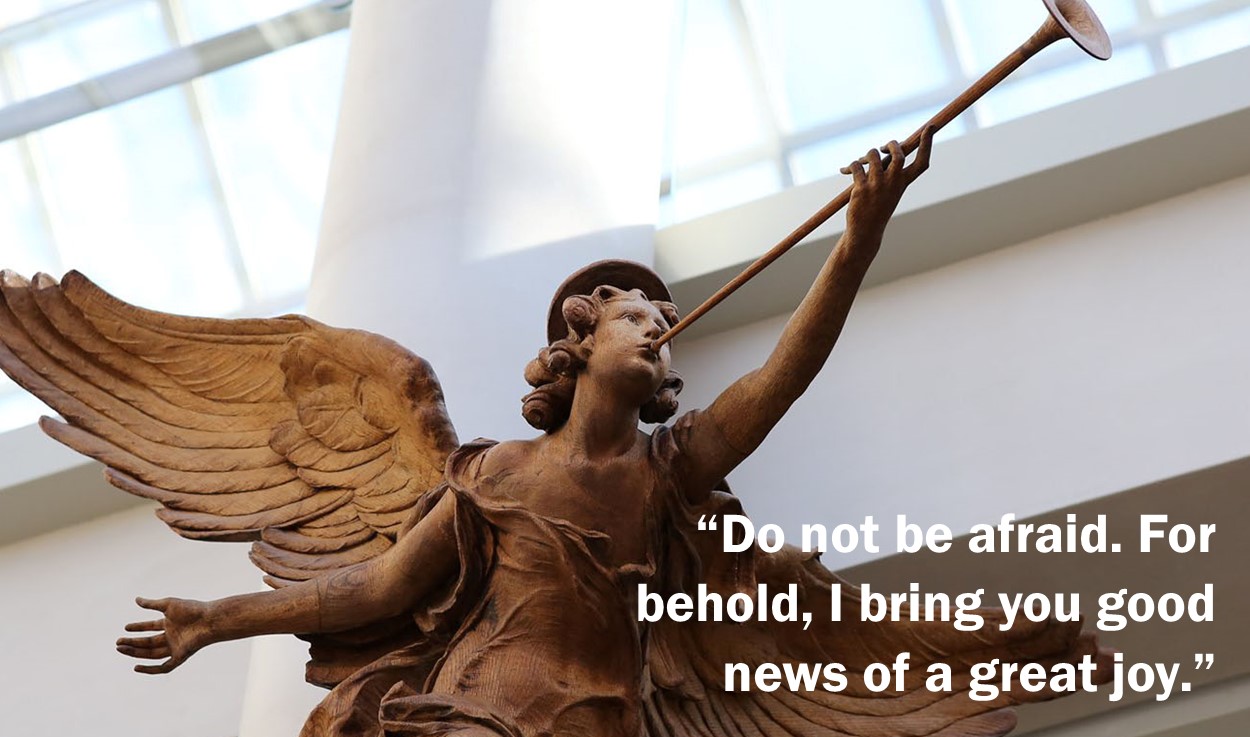 Luke 2:1-20: In those days, a decree went out from Caesar Augustus that the whole empire should be registered.  This was the first registration, undertaken while Quirinius was governor of Syria.  And all went to their towns of their birth to be registered.

Joseph also went, traveling from the town of Nazareth in Galilee, to Judea, to the city of David called Bethlehem, because Joseph was descended from the house and family of David.  Joseph went there to be registered with Mary, to whom he was engaged.  Mary was expecting a child.

And while they were there, the time came for Mary to deliver her child.  She gave birth to her first-born son and wrapped him in bands of cloths, and laid him in a manger, because there was no room for them in the inn.

And in that region, there were shepherds out in the field, keeping watch over their flocks by night.  And an angel of the God appeared before them, and the glory of God shone round about them, and they were filled with fear.

The angel said to them, “Do not be afraid.  For, behold, I bring you good news of a great joy, which shall come to all people.  For unto you is born this day, in the city of David, a Savior, who is Christ the Lord.  And this shall be a sign for you:  you will find the baby, wrapped in swaddling cloths and lying in a manger.”

Suddenly, there was with the angel a multitude of the heavenly host, praising God and saying:  “Glory to God in the highest!  And on earth, peace, goodwill among all people.”

When the angels had gone away into heaven, the shepherds said to one another, “Let us go over to Bethlehem and see this event that God has made known to us.”  They hurried and found Mary and Joseph and the baby, lying in a manger.  Once they saw this, they reported what they had been told concerning the child. All who heard about it were astonished at the report given by the shepherds.

Mary treasured all these things and reflected on them in her heart.  The shepherds went away glorifying and praising God for all they had heard and seen, just as they had been told.

Reflection: Consider how fear can limit the reach and revelation of God’s good news of great joy for all people.